The Atara-Highwind Railway is Sandrock's traditional connection with the outside world.

Martle founded Hotel Sandrock 71 years ago (year 27 after Peach) as a rest stop for caravans travelling between Highwind and the Alliance capital of Atara through the Eufaula Desert.

Five years later (year 32) a group of prospectors discovered a buried metropolis containing a huge supply of buried Relics and Power Stones. Ten years later (year 42), Atara and Highwind constructed a railway linking Sandrock with the two cities to enable an even higher output from Sandrock's Ruin Divers in the buried city.[1]

My Time at Sandrock begins with the player arriving in Sandrock travelling on this railway. At this time, Sandrock imports drinking water from Atara due to the collapse of the ecology of its local water supply, Martle's Oasis.

During the game, this vital infrastructure route is supplemented by the construction of the Eufaula Tunnel connecting Sandrock with Portia. This enables Sandrock to import water from Portia.

Rolling on down the line ... 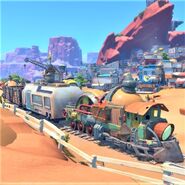