A Non-Disclosure Agreement is currently in place during the Closed Beta test, prohibiting the sharing of content, images, streams, videos, written descriptions, etc. to the public. As such, My Time at Sandrock Wiki cannot share any information from the Closed Beta at this time. All data from the closed beta version is to be kept strictly confidential, per Pathea Games.


We apologize for the inconvenience. We thank you for your patience as we work quietly behind the scenes. For more information, see Project:NDA or speak to a Pathea Games developer on the Pathea Games Discord.

My Time at Sandrock is the second addition to the My Time series and is currently being developed by Pathea Games. It is set in the town of Sandrock, an arid desert town that lies to the North of Portia, with a timeline that runs parallel to the original My Time at Portia game. Many new characters make their debut, though some "familiar faces" are rumored to feature as well. More information will be released over time.

A Kickstarter campaign for My Time at Sandrock launched on October 26, 2020 at 6am EST to help fund the game's development. The campaign rewards include Early Access keys for the game, exclusive T-shirts and art puzzles, limited quantities of the exclusive figurine of the bachelorette Ginger from My Time at Portia, and more. 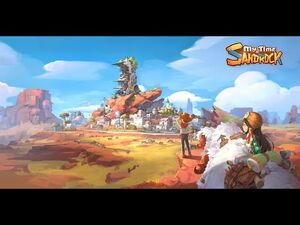 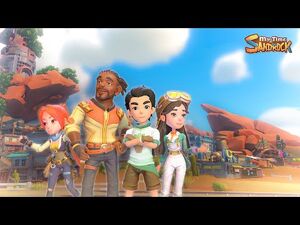 The desert world of Sandrock

Train to Atara and Highwind

The player's workshop in front of a mesa

Entrance to a Hazardous Run

My Time at Sandrock Wiki is a collaborative source, open for all users to edit, and we need your help!
Want to help out? There are plenty of tasks you can do.

Retrieved from "https://mytimeatsandrock.fandom.com/wiki/My_Time_at_Sandrock_Wiki?oldid=1250"
Community content is available under CC-BY-SA unless otherwise noted.